California has become the first state to require new homes be built with solar power systems. Bloomberg says, “California just sent the clearest signal yet that rooftop power is moving beyond a niche market and becoming the norm”. 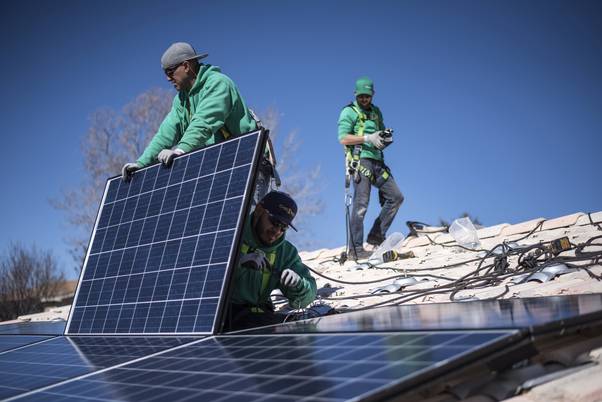 California is a trend setter, so Bloomberg might be right on the money. Its graph on the fast rise of solar in the decade ending in 2017 makes the case very emphatically. 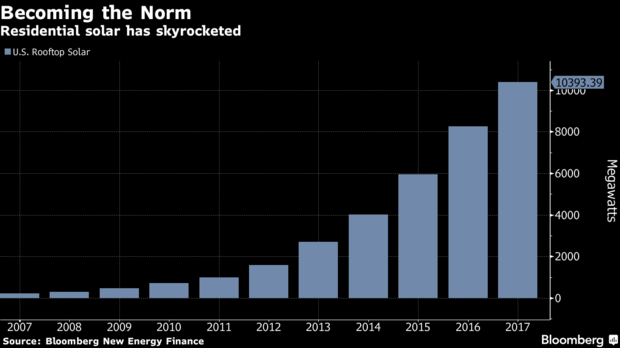 The law applies to single-family homes and multi-unit residential buildings less than four stories high. It requires those built after January 1st, 2020 to be outfitted with a PV solar energy system.

The mandate is one of four key Building Energy Efficiency Standards released by the California Energy Commission.

The immediate impact was a rise in solar stock prices (Sunrun rose 15%, e.g.) and a fall in prices for residential construction companies.

No wonder. A lot more solar power systems are going to be sold. The demand for a new home might fall, while the costs are likely to rise.

Carbon emissions will be reduced: California’s goal is a 40% reduction in carbon emissions by 2030. This legislation will produce small steps in that direction each year.

Utility costs will fall for solar homes: The CEC expects homes equipped with solar to save $19,000 over the projected 30-year life of the systems.

New home cost will rise: The CEC states that average cost of these solar energy systems will be $9,500. The average home in CA uses a 2.5kW to 4kW system.

This is great for wealthier homeowners, but for everybody else it’s one more reason to not go to California or to leave ASAP.

The demand for installers might outstrip supply in the short term:

Solar installers will likely move to CA while roofing companies already there will add solar installation to their repertoire.

The US Bureau of Labor Statistics in 2016 estimated the demand for solar PV installers would rise by 105% through 2016, or “Much faster than average” for all occupations. In California, that figure is about to be put on steroids.

If the supply of PV installers cannot keep up, and that remains to be seen, the shortage will definitely raise new home prices beyond the $9,500.

It might also cause delays in starting homes when it’s clear that waiting on the solar power system installation will delay completion of the house.

The wind power industry will be affected:

Bloomberg’s New Energy Finance analyst Colleen Regan called the mandate, “admirable but misguided.” She noted, “It’s also a policy that very clearly is picking winners, and California would be better off focusing its efforts on the real source of the problem — greenhouse gases — rather than favoring one zero-emissions technology over others”.

New home starts will rise and then fall: Some developers and spec-home builders will push to get homes built before 2020 as possible.

Demand will likely increase, and that will push prices higher, possibly higher than the cost of a solar energy system. The market will eventually balance itself.

In 2020 and beyond, the financial reality will be that some people will stay put or look for an existing home rather than opt for a new home.